It’s only been out in the Kindle format for a month and a half, but has, I am heartened to say, received quite a bit of love from book readers already.

This is from Amazon.in

In my quest to discover the works of obscure and new Indian authors, I stumbled upon Kathputli. The cover and the book title evoked my curiosity (Kathputli means puppet) as I have a tendency to gravitate towards stories that revolve around female protagonists.

This was a surprising book which balances a variety of elements- a coming of age story, the struggle of an ambitious Bengali woman, a bond between sisters, the perception of mental illness in the Indian society, the fragility of relationships and life itself. Sen traverses back and forth in time and shifts narrating point-of-view tactfully. At first, I found the constant re-adjustment a bit jarring, but once you get into the rhythm, it gets comfortable.

The plot is fairly straightforward- Kuhu, the protagonist is in search of a story for her great novel. A family re-union ignites a possibility and she chases an idea relentlessly- a bittersweet story of two sisters, one of whom is her grandmother. I won’t go into it further and spoil it for potential readers.

The story unfurls at a casual pace. There is a smoothness in descriptions of dialogue and mannerisms of characters which I really enjoyed. But above all, what Sen has done truly well is slyly slipped in deep inflections on how Indians think and behave in what appears to be a straightforward narrative. You are then forced to stop and re-read and nod your head in solemn agreement. A few examples:

“After many years of puzzling over it, she’d decided it was that Ma had one of each, a girl and a boy, so she had no need for Lata — just a spare, and not a spare of the right gender either.”

“Love is hardly an appropriate subject at a respectable wedding.”

“We’ll beat someone on the head with some blame we think she’s unaware of; the thought that she feels no guilt for what she’s doing is anathema to us; but the moment the person exhibits signs of remorse and feels pain for it, we hasten to assure her it’s not that bad at all, that she shouldn’t beat herself up about things. It’s almost like we want to see pain. Once we see signs of distress we are comforted that things are as they should be.”

As an aspiring writer myself, I found myself in awe at these junctures.

I would have liked a bit more on the love angle with Kuhu and Karno. Perhaps in a sequel?

5.0 out of 5 stars Five Stars
ByAmazon Customeron 3 January 2017
Format: Kindle Edition|Verified Purchase
A wonderful read…Completely gripping. I’m not an avid reader but this kept me glued till completion. Just loved it.
5.0 out of 5 stars Excellent read !!
ByBinduon 21 December 2016
Format: Kindle Edition
Thoroughly enjoyed reading the protagonist Chitrangda’s journey through different places in search of her perfect story. Ushasi has beautifully taken the narration back and forth in time and many a times it almost made me feel as though I were present in that room listening to the narrator. The glossary in the end is helpful for non-Bengalis like me but certainly does’nt interrupt the flow as most words are easy to comprehend given the context. Looking forward to many more interesting reads, Ushasi.
5.0 out of 5 stars Awesome read!
ByNamita on 16 December 2016
Format: Kindle Edition
Absolutely loved this book. A perfect book to sit down with a cup of coffee in this weather! It’s fast paced and full of unexpected twists and turns. Retains the air of mystery all through but manages to tie up all the loose ends neatly at the end! For me, a good book is like one where it feels like a friend is telling you the story. A great one is where it feels like the story is being played out in front of you! This one is great ! You’re rooting for the protagonist as she races to find the truth and you hold your breath once you reach the spell binding finish! Looking forward to more !!
5.0 out of 5 stars A riveting read
ByAnonymouson 13 December 2016
Format: Kindle Edition
A fast-paced story across two time periods which flows very well. A real page-turner. With some compelling insights into human behaviour thrown in.
5.0 out of 5 stars Loved the book!
By Madhavi Ochani on 13 December 2016
Format: Kindle Edition
This is a very compelling book and I couldn’t put it down once I started reading it. This book presents the lives of people from a Bengali family with origins in Kolkatta, India as seen through the eyes of Chitrangda, the protagonist. She goes on a wonderful journey of rediscovering herself where she unlocks secrets within her family and takes the reader along with her. Ushasi’s narrative is beautiful and for all the non-Bengalis, there’s a very enlightening Glossary section. I loved this book and would highly recommend it to all readers.

Goodreads tells me some people have loved it; I have no idea who this Ushasi Sen Basu who has given it 5 stars, is, but she seems to have good taste! 😉 ; and others are in the process of reading it. I hope once the paperbacks are out, this list will be too big for a screenshot. 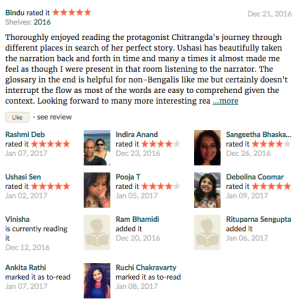 A big ‘Thank you’ to everyone who’s taken the trouble and time to not only to read, but to rate it! Hope to see many many more in February!